This is a story shared by Nancy Inlow on behalf of her parents, Art and Viv Meyer, former residents of Elbow Park.

My parents, Art and Viv Meyer, had lived on Park Lane since 1992 and another dozen years on Garden Cresent from 1962 to 1974 without ever having any raised water in our streets. The 2013 flood event was beyond comprehension. 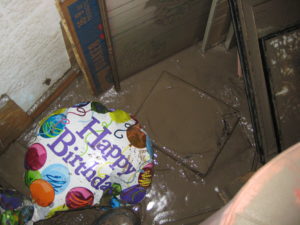 When they were told to evacuate and that all power and water would be turned off, it was with disbelief that we vacated them. In fact, they left their cars at home.

Twenty hours later, we were wading across the street to retrieve the cats and extra clothes, and 24 hours after that we drove into the neighbourhood to find a home with dirty, smelly water up to the basement ceiling.

The spare fridge freezer and hot water tank had floated up and were precariously perched atop other appliances. Family memorabilia, office papers, couches, chairs were all jumbled, saturated, and split apart. Wine, preserves, foodstuffs all under water. 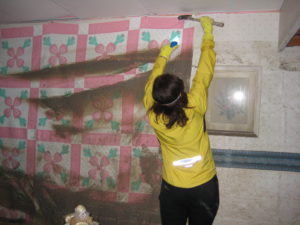 Another twenty-four hours and the water had drained leaving a foot of sludge covering everything.
Nothing of cloth could be recovered. Nothing of wood had withstood the soaking.

And then the work began of hauling out and hoping something could be saved. The emotional drain was enormous and anxiety producing. My parents were 85 years old at the time. 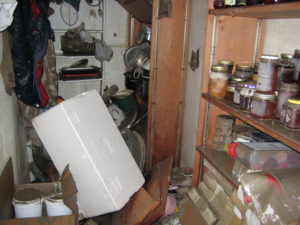 All the river valley communities and businesses looked like they were in a war zone. Great piles of smashed and sodden furniture, appliances, carpets, drywall were out in front of every single home.

The volunteers who came in to help were amazing! The city garbage crews were incredible.

At the end of it all, my mother, with respiratory problems, was advised to not return to their home.

Six years later my mother still refers to 2013 as the year they became ‘homeless’ even though they moved on to an apartment in Marda Loop and then to the Fountains of Mission. But to lose 50 % of your possessions in your mid 80’s is not something you emotionally recover from.

The need to ensure this does not happen again cannot be stated strongly enough!