The federal government has announced it will provide $168.5 million to help fund the Springbank Off-Stream Reservoir (SR1) on the Elbow River. 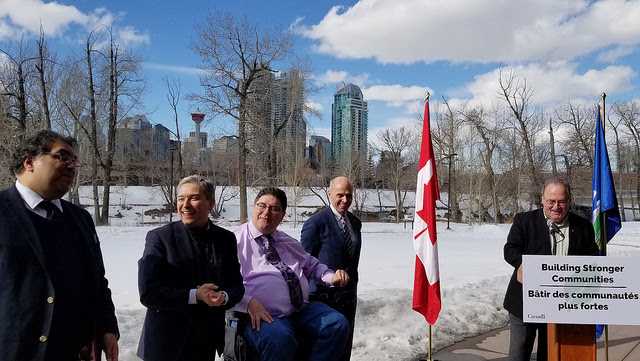 Minister Mason speaks at the federal announcement of $168.5 million in funding for the Springbank Off-Stream Reservoir.

This is the second significant development for SR1 this year, following January’s news of former SR1-opponents the Robinson family agreeing to sell their land for the project.

The Springbank Project is estimated to cost $432 million. Following completion of SR1, lands outside of the project footprint will be resold, resulting in an estimated net cost of $372 million.

The $432 million required for the project had previously been allocated in the provincial budget, but this announcement of federal funds is good news, indeed.

As it stands now, the province has acquired 20% of the land required for the project and negotiations with landowners are continuing.

Regarding the regulatory review, Alberta Transportation is still compiling its response to the Canadian Environmental Assessment Agency’s (CEAA) information requests.

The most recent timeline from August 2017 projected full completion in late 2022. This is likely to be delayed but the province is reluctant to give a revised projection at this time.