This is a story shared by David Allen, a current resident of Roxboro.

Our initial reaction to the evacuation announcements going out over the radio on June 21, 2013 was one of scepticism more than anything. However, the gravity of the situation hit home as we made our way back to our neighbourhood from downtown that afternoon. As we neared the Elbow river we were forced to detour because heavy equipment was scrambling to build a massive earthen berm along Elbow drive by 5th street. 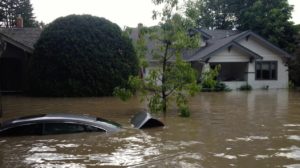 Once home, family members gathered to help us move as many of our belongings out of the basement as possible. By early evening, the police knocked on our door and told us we had to evacuate.  We left the city that night to stay with friends out of town…following the news closely that night.

The next morning we returned early to our neighbourhood and were truly stunned by what we saw happening. Standing waves had formed in the middle of 30th ave as Elbow river flowed through our neighbourhood. 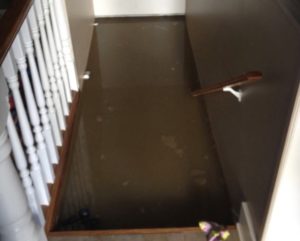 As the rains subsided over the next couple days and the water level dropped, we were finally able to get into our house to survey the damage.  The flood waters had filled the basement and covered the main floor. Everything was covered in mud, wall board was swollen and falling from the basement ceiling, appliances were overturned, but worst of all, the foundation of the house had failed.

At first we believed that the structural integrity of the house could be preserved so we did what we could to prepare the house for the necessary repair work. Friends, family, and countless volunteers worked tirelessly to help us through this time.  During those days emotions ran high and many tears were shed because of the overwhelming gratitude that we felt toward those who assisted us. 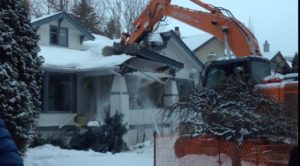 In the end, after the countess hours spent trying to save our original house, it sadly was deemed structurally unsound and had to be demolished.  We have since rebuilt and moved forward, however we remain eternally grateful for the unparalleled volunteerism and community support that was extended to us during those grey days back in June 2013.