This story was originally shared by the Victoria Park BIA on behalf of Scott Roberts, Director of Marketing at the Elbow River Casino.

Scott Roberts, Director of Marketing at the Elbow River Casino, says the day the 2013 floods ripped through Alberta was one of the craziest days he’s experienced; even after 11-years as Cruise Director for Princess Cruises. 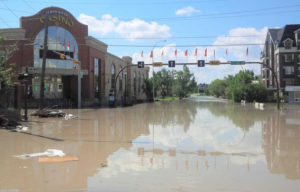 He describes the day as perfectly blue-skied and sunny – one that made him feel as if he hadn’t a single worry in the world. He had no idea that when he walked out of the casino doors after evacuating around 1500 customers, he would not return to work for over a month.

For this particular business, flooding posed a very serious threat. Not only because casino-goers can be a tough crowd to escort from winning streaks, but because of the massive amount of electricity that runs through the building. If the power were to be on while people were in the building; and any amount of water was to make it onto the games floor, it would have been fatal. Luckily, each and every guest in the casino made a safe exit – and even when the water was at its very highest, it did not quite reach the main level of the casino.

The flooding did, however; make its way into the underground two-level parkade, filling it completely with water. One vehicle, unfortunately, did not make it out of the parkade and was completely destroyed. Scott says that the water crept all the way up to the top step of the front entrance on 17th Avenue (about 10 steps high). 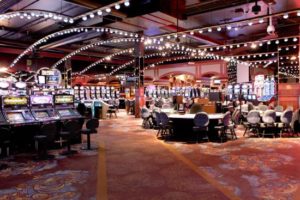 Because nobody was able to return to the downtown core for multiple days after the flood, it was difficult to assess the casino’s damage. When Scott finally returned to investigate, he compared the downtown area to a warzone. He had absolutely no idea what he was about to walk into when he unlocked the doors.

Although the casino suffered very little damage in comparison to many of its neighbouring businesses, it still took an entire month to restore the building to a functioning condition.

This was a difficult time for Elbow River Casino, but they made it through, thanks to many volunteers within the community. Scott also mentions that his incredible staff played a huge role in the reopening of the casino. The Elbow River Casino has had its share of tough times, but the team is able to make the best of any situation.