Both Ministers Ric McIver and Doug Schweitzer spoke at the event and each emphasized the province’s strong commitment to protecting Calgary, and to the Springbank Off-Stream Reservoir Project (SR1) specifically.

Each year this event offers an opportunity to hear in-person from elected officials and experts responsible for executing key flood mitigation projects, and also serves a check-in on how efforts progressed over the year. 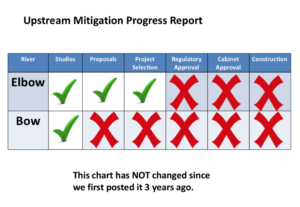 In their progress report, CRCAG highlighted that neither projects on the Elbow or the Bow River have advanced to the next step in the last three years; with SR1 still in regulatory review and no project selected for Bow River yet.

Despite the appearance of stalled progress, work on these upstream projects has continued (albeit slowly).

A few highlights from the AGM event include:

You can read CRCAG’s summary of their event with links to presentations, photos, quotes, Q&A, and more on their blog: Summary of 2019 AGM.