Rocky View County council has voted to officially oppose the Springbank Off-Stream Reservoir Project (SR1) that is planned for the Elbow River.

The county will ask the Province to halt the project and to reconsider alternate options, such as the McLean Creek (MC1) project.

In the report reviewed by RVC council on Tuesday, county administration outlined that the county would bear all the impact of SR1 but that only Calgary would benefit, as well as citing a lack of stakeholder engagement, inadequate Indigenous consultation, incomplete evaluation of other options, and drought concerns. 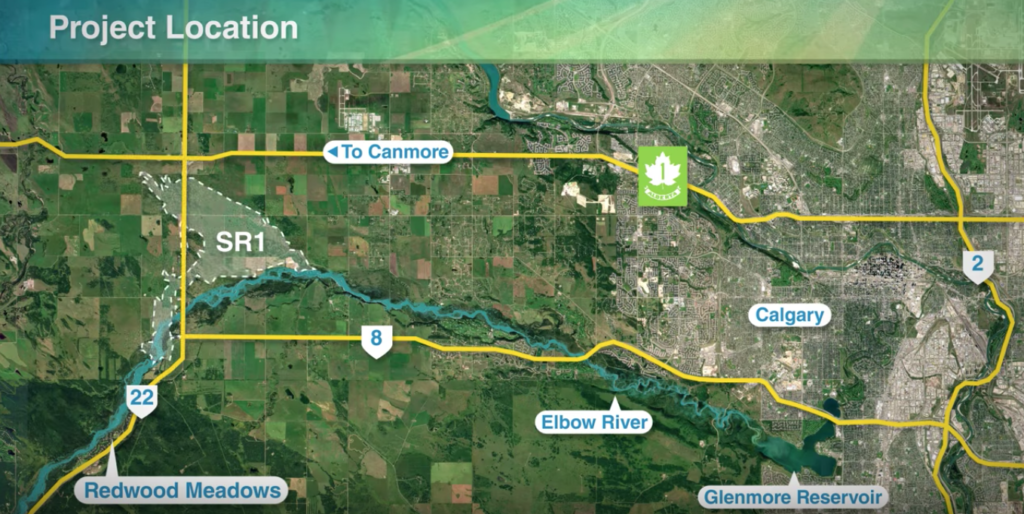 The project will be located about 15 kilometres west of Calgary near Springbank Road, north of the Elbow River (Image: Government of Alberta)

Mayor Nenshi reacted strongly to the both the RVC decision and comments made by county Reeve Greg Boehlke on the CBC that morning.

“We’ve been working on this for five years, there has been extensive community and public consultation, there have been multiple scientific studies by outside experts that show the Springbank dry dam is the right choice and the reeve says this was sprung on them, there were no alternatives looked at, and there is no benefit to the county. All of these things are not just false; they are deeply offensive.” – Mayor Naheed Nenshi

“The SR1 project is vital to protecting the economic engine of the province and the 1.2 million Calgarians and other Albertans living downstream, and would require the GoA acquire land from as many as 22 landowners in Springbank. SR1 is one piece of the flood mitigation system for Elbow River communities, including projects for Bragg Creek and Redwood Meadows for Tsuut’ina Nation.

The project is in regulatory review, which includes the opportunity for stakeholders, the public and municipalities to address their concerns and support with both the federal and provincial regulators. Any change in strategy at this point would mean starting over in a process that has already taken five years, further risking the health, safety and economic well-being of Albertans.” – Brian Mason, Minister of Transportation

The project is currently progressing through regulatory reviews and, if there are no further delays, construction is expected to begin in 2019.