On May 9, Flood Free Calgary joined members of the Chinatown community to discuss the need for upstream flood mitigation. 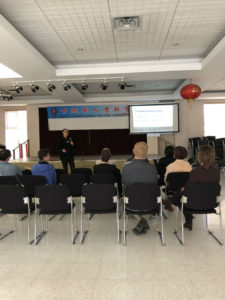 Attendees were engaged and had many questions for presenters. We’ve included a full recap of Q&A below and you can view the City’s slides here.

Following the presentation, the Chinatown BIA, the Chinese Cultural Centre, and the Calgary Chinese Seniors Housing Society all joined Flood Free Calgary as supporters in our efforts to expedite upstream flood mitigation infrastructure.

We had been working with the Chinatown BIA for a couple months to organize this event and were happy to make it happen following the election.

Thank you to everyone who was involved in the evening!

Curious how you can help us keep the momentum in the push for upstream mitigation? We’d be happy to meet with your organization to discuss obstacles and opportunities to getting critical projects built. Email us at info@floodfreecalgary.com to find out more.

What is the budget required for these projects?

Sandra Davis: The City has been provided with $150 million from the province for local flood mitigation. Regarding SR1 those cost estimates continue to change but it is under $500 million right now. A new reservoir on the Bow will be upwards of $500 million. 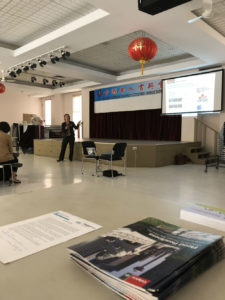 Significant funding is required, but when we compare that to the amount of potential damage from flooding in Calgary, the studies that the City did showed that for all types of floods that could occur in Caglary, say over the next 100 years, the potential damage that that could do if not mitigated could be $168 million per year on average. That’s why we are still seeing that cost benefit. There is a significant risk in Calgary, that justifies significant investment.

How do you prioritize what will be funded first?

SD: The projects are being prioritized according to several different criteria, one of which is risk; the highest priority in terms of public safety is protecting infrastructure and citizen safety.

Others are implementability. Some of the projects are being implemented with other projects, like the West Eau Claire Park. They were doing the Eau Claire Public Realm anyways so they were able to integrate it at the same time. We’re also going to be integrating with improvements to this area (Chinatown), to the Centre Street Bridge, and to the ramp replacements, which will eventually be life-cycled. So some of it is taking advantage of these synergies.

How can the general public access the City’s weather monitoring results?

In 2013, there were quite a few places in Chinatown that were flooded but there were also other locations that were not affected. For example, the Chinese Cultural Centre was not affected at all, and even our building was affected a little bit only because our generator quit after 10 hours, however, right next to us there were buildings that flooded. I am just wondering what the City learned from all this.

SD: There are a lot of different factors. When we compare our mapping, our mapping is conceptual modeled mapping, it doesn’t always reflect exactly what happened in 2013 because of factors like that; who has sump pumps, better pumps, bigger pumps, etc.  It could even be things like cracks and holes in the walls, sewer backup (if there are backflow valves or that type of thing).

I think the City should look into this because there could be a lot of things building owners could do in terms of making their buildings flood-ready.

SD: That’s something we’re looking at in the next couple of years including regulations around buildings and building codes, and education. Over the last year and this year, we’ve been hearing from citizens that they are looking for that really practical information of what do I do, how do I prepare, what do I do in my building and so that’s where we are trying to go with our materials, but there is more information coming out.

For our building, our elevator company said that if your elevator was in the basement or on the main floor because the elevator cables were on the floor they would get wet or damaged. If we had information telling us that the elevator should be put to a higher floor then it would have prevented many elevators from being damaged. It would be nice to have a place to house information like this that building owners could access.

SD: It sounds like a great thing for the City to do some engagement into a lot of these kinds of tips that your community has learned.

This event was good for information sake but who is driving all of this?

SD: The information about how to prepare and flood readiness would be from the City, as part of the Watershed Planning group’s work. In terms of the mitigation efforts, it is really a combined effort. The City has a plan and we are working very hard on that and we rely very much on organizations like CRCAG and Flood Free Calgary to help.

The big study work for upstream mitigation is being done by the Alberta government, that’s in their jurisdiction, and they’ve got great websites capturing all the work that has been done; just google for “government of Alberta floods” and you’ll find all that information.